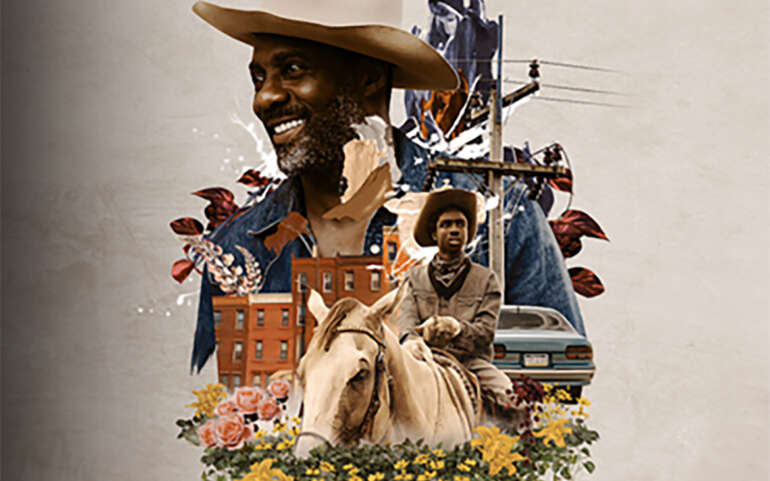 “Go west young man.” America is a restless nation, perpetually in motion, filled with rambunctious, stubbornly independent strivers on vigilant lookout for some inchoate something just over the horizon waiting to be explored or conquered. The pull, the indefinable longing for a world unbounded drives our people from pillar to post, across distances and careers, the hot blood of the pioneers in their veins. There is no greater image of this than the Cowboy, the one who rides alone into the sunset astride a mighty horse. John Wayne, Clint Eastwood, Gene Autry, and Roy Rogers made careers embodying this myth.
The myth of the cowboy arose almost precisely when the vocation had faded from necessity and precisely when America was unwilling to tell true ethnic stories, by default black folk were excluded from the legends and the myths. Black folk were always at the forefront of the West, cowboys, Exodusters, and landowners all wresting a living from the trackless wildernesses. Yet, history and popular culture have given them short shrift.

Concrete Cowboy seeks to rectify this malicious mangling of the historical record by telling a classic coming of age tale against the backdrop of true American originals: the Fletcher Street Riders (an urban riding club located in the heart of Philadelphia). At first blush, the Caleb McLaughlin/Idris Elba vehicle would seem to be nothing more than a coming-of-age story with a different demographic, but that initial reading could not be more mistaken. Concrete Cowboy tells a story of history, masculinity, family, and race pride with grace and tact, avoiding our current era’s obsession with histrionic and performative “activism” in favor of quiet revelation and strong communities. The centerpiece of the movie is Caleb McLaughlin’s Cole and he turns in a terrific performance.

Beneath the surface of the seemingly uninspired plot, director Ricky Staub invests even the simple and fleeting with immense meaning. A typical instance is a short scene as Amahle (Cole’s mother played by Liz Priestley) drives Cole from Detroit to Philadelphia. In just a few short bursts of conversation Amahle and Cole recapitulate the breadth and depth of contemporary urban depravity and cynicism. “Stop acting like you know,” Amahle tells Cole, pushing back against Cole’s youthful superciliousness. The movie takes direct aim at the arrogant, supposedly street-smart youth culture that talks too much and knows too little. Staub returns to this theme, showcasing the downfall/tragedy of a character who sarcastically snarks at the efficacy of Cole’s father’s attempts to discipline him – “good old tough-love Harp.”

Idris is never better as “Harp”, Cole’s father. Towards the end of the film, Idris delivers a weatherbeaten, world-weary soliloquy that rivals the “I ain’t got to like you” moment from Fences and the single best moment in any 2020 movie- Delroy Lindo’s ending monologue in Da 5 Bloods. Idris is a powerful presence in this film and works beautifully with McLaughlin.

Every movie builds to a crescendo but usually, the director defers it until the end. Concrete Cowboy, however, takes another tack. The true crescendo of this film occurs in the earnest, seemingly uncomplicated inversion of the Western myth created when in the second act, Cole masters his horse and his fear. Every story of man and horse is obligated to have the same arc, these stories can only go one way- but Staub manages to breathe new life into the narrative necessity, creating something that goes beyond the beautiful to the profound. The picture of Cole – silhouetted against the setting sun, astride his mighty steed, flushed with victory and the thrill of manhood- is the picture of the old west that was kept from us. A black heritage we were never allowed to see.

This act of reclamation is not accidental, Rome (played by Byron Bowers) makes sure to hip Cole to the fact that the Lone Ranger is based on a black man (Marshall Bass Reeves) and around the same campfire Cole’s elders remind him of the long history between black folk and horses. This connection is showcased in a fascinating aside about the history of “breaking horses.” A story of the understanding that arose between beasts of burden and those who had to struggle not to be.

The film also shows courage in showing the complexity of the relationship between Law Enforcement and Black folk. Method Man plays Leroy with intelligence and sensitivity, refusing to fall into an NWA stereotype or a BLM one. In the world of Concrete Cowboy, Law Enforcement and Black people have a fraught relationship but manage to make their way through a difficult world. When the final challenge comes at the beginning of the third act, Cole and Harp find themselves engaging in the kind of midnight derring-do that 100 years ago would have been told at campfires.

Concrete Cowboy is also suffused with religious symbolism: Cole proceeds by way of two biblical stories Daniel in the Lion’s Den and the prodigal son. Nessie (played by a vibrant Lorraine Toussaint) embodies the enervated Christianity that struggles against the rising tide of disbelief. Refreshingly, She is portrayed without the condescension and pig ignorance that Hollywood employs in telling the stories of Christians.

Finally, Concrete Cowboy does what is most difficult for black films, telling stories with emotional stakes without the crutch of exploiting black trauma. There is trauma, there is pain but it is human pain, discernable without blackness but sharpened by it.

The ending is truly sublime, the mythic western crashing into the settled and cynical present. After tragedy and ritual, Cole, Harp, and co. leave a cemetery and reemerge over a concrete hill as one unit, united by grief and loss, resolved to carry on. They make for an odd sight for the citizens of the sprawling city of Philadelphia. Mounted on horses, bound to the earth they represent blackness out of time, lights hidden under bushels kept alive by the struggle against the encroaching urban world. This struggle is a human struggle against the profit-mad developers who see no boundaries in the imperfections of old cities, for those alienated from nature by the advances of technology and for those skeptical of tradition and in thrall to the self-consciously modern. This film is an ode to tradition and the transformative power of black love and black accountability.