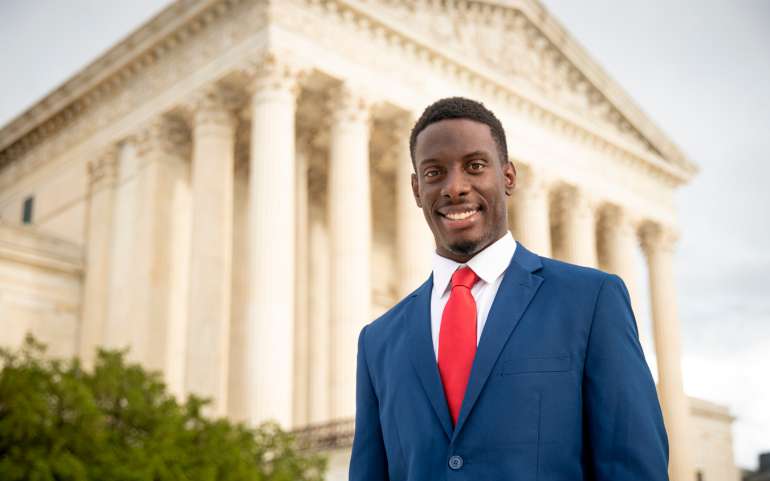 The Frederick Douglass Foundation filed an amicus brief in support of Chike Uzuegbunam in the United States Supreme Court case Uzuegbunam v. Preczewski. Oral arguments were presented January 12, 2021. Uzuegbunam, a Christian African-American, tried to share his faith in Christ with others on the taxpayer-funded campus Georgia Gwinnett College. He was approached by an officer for violating the student code because he didn’t reserve the space to speak. Uzuegbunam filed a civil rights lawsuit against the College citing First and Fourteenth Amendment rights. Subsequently, because of the challenge, the school revised its Freedom of Expression Policy to allow students to speak anywhere on campus without having to obtain a permit. Thus, the issue resolved in favor of Uzuegbunam. Nevertheless, what remains for the Supreme Court to consider is whether the underlying constitutional challenge despite seeking nominal damages can still be considered unresolved if the unconstitutional policy is revised during litigation. In short, the justices will be determining whether the case is moot after the college changed its policies as the lawsuit was pending.

It’s important to note that because the college officials stopped Uzuegbunam from sharing his faith they caused concrete injuries. Those injuries last forever. As the Alliance Defending freedom Attorney Kristen Waggoner argued, Uzuegbunam will never get the chance to get those days back and speak his message to his peers and no policy change can ever restore that lost opportunity. Therefore, the appropriate remedy to redress those past harms is nominal damages.

Especially given FDF’s work on university campuses across the country, our organization has an acute interest in ensuring that publicly funded schools remain free from the sort of coercive, unconstitutional speech restrictions Mr. Uzuegbunam was subjected to. We seek to ensure that a price is paid when that restriction occurs.

The facts here were common and can be repeated if not addressed with finality. The college has unconstitutional speech zones which restricted where speech outside of that zone could take place. Uzuegbunam was not standing in the exact “proper zone” as he shared his faith and distributed literature to other students. The school, further silencing his speech, required him to obtain permission to use the speech zone. The school reversed the policy. But, even with a policy change extended time or freeing up Uzuegbunam to speak, there still needs to be a cure in the form of nominal damages for the underlying constitutional violation. Nominal damages are in place to provide a remedy here. Nominal damages address injuries that transcended price tags from unconstitutional restrictions especially in the free exercise and free speech context.

The Frederick Douglass Foundation in our current litigation against the District of Columbia knows all too well that constitutional rights of speech are invaluable even when they don’t result in quantifiable harm. If the court, however, gets this wrong, they will be treating these rights as worthless.

To condemn a student as engaging in “disorderly conduct” because someone could theoretically claim that his speech makes them uncomfortable or disagrees with it is a violation of basic constitutional right. And while the individual matter is resolved, what still remains is government’s future ability to threaten citizens with disciplinary action unless that citizen stops speaking. This is such an outrageous outcome to one exercising his liberty on an American college campus. We are proud to support Mr. Uzuegbunam’s commitment to not negotiating his fundamental right to live out and share his faith.

As our namesake, Frederick Douglass, understood: “Liberty is meaningless where the right to utter one’s thoughts and opinions has ceased to exist.” Thus, we stand with Chike in his fight to restore first freedoms on our college campuses.

DLI in the News II